Each year, in conjunction with the AAHOF Banquet Dinner, 3DAAA presents 2 medals.

The first is for service to the Association. Previous winners include Garry Dawson, Kim Melit and Norm Bardell. This year’s joint winners are Glenn and Teresa Noble. 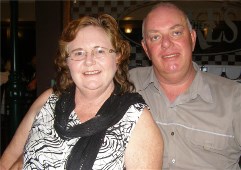 The medal is recognition for all their years of involvement with the Hinterland Club, initially as an ABA club and recently as a 3DAAA club.

During their 13 years of involvement with the club, they have both served on the Committee primarily as President and Secretary for 12 of those years.

Together they have overseen the club grow from a membership of 12 to a current number of 203.

For those of you who have visited the club, you wouldn’t think it was just a tin shed with dirt floors in 2000.

The second medal to be awarded on the night, is a more recent addition and is the Archer of the Year. Last year’s winner was Rhys Aizlewood. 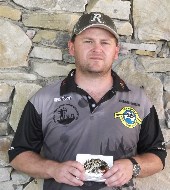 This year’s winner is Gerard Miles. His win in the  prestigious MBO division of the IBO World Championships in the USA last year got him the gong in front of some stiff competition.

I’m sure when he started shooting as a cub back in 1985, winning or even attending such an event would have only been a dream.

Gerard has also taken on the position of Vice President of the Association and will step up into the top role in June 2014.